I left a comment on my last chapter, a little prematurely, asking for help. I’m sorry if I upset any of you. I really did need help. I was going to avoid mentioning this, but I can’t just not give you an explanation after my comment yesterday. So here is a very condensed version of what happened last night.

Yesterday morning, I saw Rob and Nathan leave their house with suitcases, and assumed they were going away for the night. I decided to use the opportunity to sneak inside. I thought that if the house was empty, I could come back after dark and get in without any problems. Then I’d see if I could find out any more about the visa issues, and prove they’re dating. That was all I was planning to do, I promise. Just have a quick look around and then leave. I wasn’t going to take anything, move anything, do anything at all.

It was a huge mistake. Obviously.

I got inside by squeezing through a half-open window at the back. There’s a porch roof that extends close enough that I could get inside. The house itself is kind of bland – they’ve not been living there long enough to have decorated much.

There were some framed promotional Loch & Ness posters on the upstairs landing, but not much else. I started by looking around the office. There were some bills and papers, and a script for one of the new episodes of Loch & Ness, with notes in the margins in Rob’s handwriting. There were some documents for Nathan’s visa application too, but they must have been the expired versions, because they were cut up into pieces in the garbage.

There were framed pages from a fanzine on the wall, hand-typed on yellowing paper. I took a photo and transcribed them – see the footnote at the end.1 I think they might have been written by Rob’s dad back in the seventies. 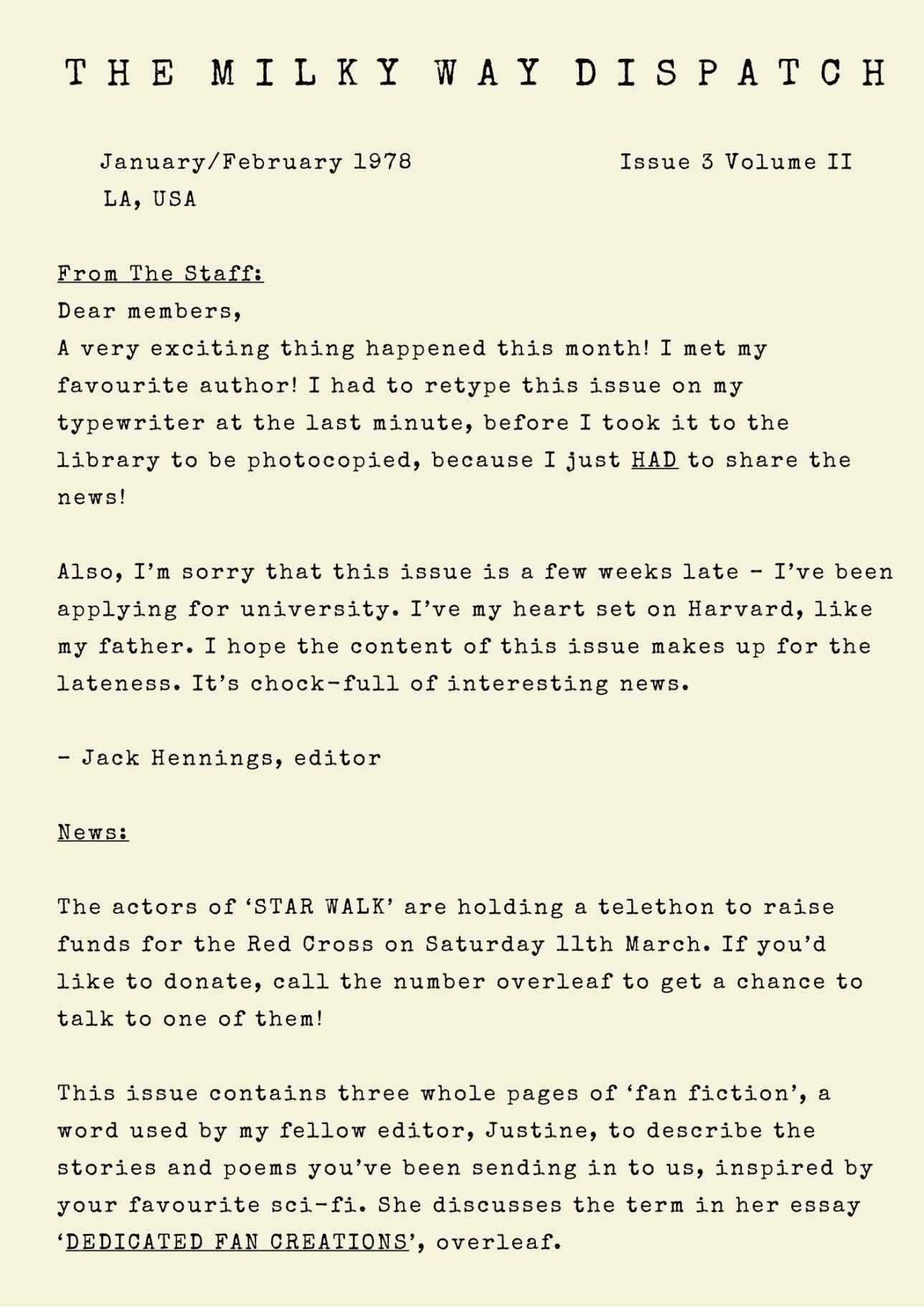 Then I opened one of the desk drawers and found a laptop. I was completely thrown off my guard here, because it wasn’t just any laptop.

It was my laptop.

The one that was stolen from my room last week. It had the same stickers on the battered case – Loch & Ness’ magical police department crest, ‘I Am Groot’, ‘Sorry Baby x’ from Killing Eve – it was definitely my laptop.2

I just stared at it for the longest time, unable to believe what I was really seeing. It was so unexpected that it felt like, I don’t know – a break in the matrix? A dream? A weird self-insert fantasy?

For a start, I couldn’t understand what it was doing in Rob Henning’s office drawer – or why he would ever want it. I’ve had chance to think about it since then, and I’ve worked out that he must have been the one to steal it from my house.

If Rob took my laptop, that must mean that he wanted me to stop posting this blog.

I don’t know if you will agree with this, but surely he wouldn’t have stolen my laptop just to stop me from posting about his relationship? That’s a pretty major step to take.

So, I’m a bit stumped about what he’s so desperate to hide. It must be something really huge if he’s going to so much trouble to conceal it. I’m clearly getting close to a big revelation here.

I didn’t have time to work all this out while I was there, of course, but I was still shocked. I must have stopped paying attention to my surroundings, because I was getting the laptop out of the desk drawer when I heard a noise out in the hall. Someone had come home. I’d been too stunned and distracted to even notice.

I grabbed the laptop and scrambled under the desk, out of sight. I had seen Rob and Nathan leave the house with suitcases that morning, so I’d thought I’d have the house to myself. I hadn’t even made a plan for what to do if this happened. I just held still and held my breath.

Rob opened the office door and came in. He sat down at the desk and turned on his desktop. I shuffled right up against the wall, so his knees didn’t knock into me.

I was trapped there. If I made a single noise, he would have discovered me. That’s why I posted that comment, asking someone to call for a pizza. I wanted the door to ring so I’d have chance to sneak out of the window.

Rob left the room after a while, and I heard him talking to Nathan out in the hall. I took the opportunity to escape out of the window and get the hell out of there.

And that’s it. Nothing else happened. I didn’t even get a chance to look for the bedrooms, to see if they share a bed.

7 thoughts on “Chapter 12 – An Explanation for the Drama”

Lauren James was born in 1992, and has a Masters degree from the University of Nottingham, UK, where she studied Chemistry and Physics. She is the twice Carnegie-nominated British Young Adult author of The Loneliest Girl in the Universe, The Quiet at the End of the World and The Next Together series, as well as the dyslexia-friendly novella The Starlight Watchmaker and serialised online novel An Unauthorised Fan Treatise. Her upcoming release is The Reckless Afterlife of Harriet Stoker. She started writing during secondary school English classes, because she couldn’t stop thinking about a couple who kept falling in love throughout history. She sold the rights to the novel when she was 21, whilst she was still at university. Her books have sold over fifty thousand copies in the UK alone, and been translated into five languages worldwide. Her writing has been described as ‘gripping romantic sci-fi’ by the Wall Street Journal and ‘a strange, witty, compulsively unpredictable read which blows most of its new YA-suspense brethren out of the water’ by Entertainment Weekly. The Last Beginning was named one of the best LGBT-inclusive works for young adults by the Independent. Lauren is a passionate advocate of STEM further education, and all of her books feature female scientists in prominent roles. The Loneliest Girl in the Universe was inspired by a Physics calculation she was assigned at university. The Quiet at the End of the World considers the legacy and evolution of the human race into the far future. Lauren lives in the West Midlands and is an Arts Council grant recipient.  She has written articles for numerous publications, including the Guardian, Buzzfeed, Den of Geek, The Toast, and the Children’s Writers and Artist’s Yearbook 2020. She teaches creative writing for Coventry University, WriteMentor, and Writing West Midlands, providing creative writing courses to children through the Spark Young Writers programme. View all posts by Lauren James